Each football season, my husband, Scott, and I look forward to watching our grandson, Justin, play football. It’s thrilling live action, as though you’re right in the game. You hear clashing of helmets; almost feel the hits. And for those, like Scott, who played high school football, you’re transported back in time, remembering the game, the plays, and what it took to win.

Scott amazes me. He understands and sees everything in the game, each move Justin makes, when he’s on the field and when he’s off. Me, I can barely keep track of the football. Most of the time I have to look for the pile of bodies to know where it is.

Our Justin plays defense. He’s a linebacker, I think. At least that’s what the newspaper called him when he intercepted a pass. Anyway, a football team’s defense doesn’t usually score points, although Justin’s defensive squad has scored several times this season and actually won a game for us.

Even though I’m not a super football enthusiast, recently when I was reading the book, Spiritual Warfare, by Dr. Karl Payne, Leadership Development & Discipleship Pastor of Antioch Bible Church in Redmond, WA and Chaplain of the NFL Seattle Seahawks, I got excited. I came across his strategy for effective battle in the unseen realm. When he used the words offense and defense relating them to prayer, I naturally thought of Justin. 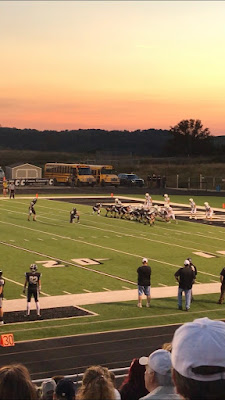 In football, as in life, a strong and powerful defense is needed. Defense is designed to hold back the opponent and stop them from scoring. Defense reacts to what the adversary is doing. However, a tough and aggressive offense is just as important. For the offense to win the game, they need stratagem. They follow plays designed to cut through the enemy’s line, move the ball downfield into enemy territory, and score.

Dr. Payne says, “I encourage believers to call upon God not only to protect them from evil (defensive prayer), but also to expose and tear down those trying to destroy His Children (offensive prayer).” The enemy, he says, is “…no match for the One committed to protecting us.”[1]

Psalm 35 seems to be what Dr. Payne calls offensive prayer:  “Plead my cause, O LORD…fight against those who fight against me. Take hold of shield and buckler…stand up for my help…draw out the spear, and stop those who pursue me…Let those be put to shame…brought to dishonor…turned back and brought to confusion who plot my hurt…And let his net that he has hidden catch himself; in that very destruction let him fall.”[3]

So, if I understand correctly, defensive prayer is asking God to restrain the enemy, and stop him from scoring points in our life, much like a football team’s defense. But offensive prayer seems forceful and forward moving. It’s asking God to go before us, tear down the enemy stronghold, cut through their defense, and create an opening for us to shoot through, cross the goal line, and win the victory.

Yet, a football field is lengthy, as is our trek. There are tackles along the way and sometimes we need our defense to play while we strategize. In those disheartened, wounded, and weak times, we must remember, God Almighty IS our defense and our offense. Our strategy and responsibility is to run behind Him, believe, PRAY, and ask. Sometimes God says, “…stand still and see the salvation of the Lord”[4] while enemies turn on themselves. And sometimes, He says FIGHT. We draw near to God, resist the enemy,[5] put on the armor and use the Sword of the Spirit.[6] God becomes our Blocker plowing a hole through the enemy’s line. We, then, run through, score, and WIN, because, He has already won.

“But thanks be to God, who gives us the VICTORY through our Lord Jesus Christ.”[7]