- October 06, 2013
With Amalek defeated, Israel gladly left Rephidim and the bloody memories of battle. Almighty God, in the Pillar of Cloud led them to the Wilderness of Sinai and the mountain where He first appeared to Moses.

This was familiar land and a place of safety, because Sinai was nearby the country Moses called home after he fled Egypt forty years earlier. Israel arrived here three months to the very day, since they had escaped.

In the shadow of this great mountain, God gave them rest and peace. 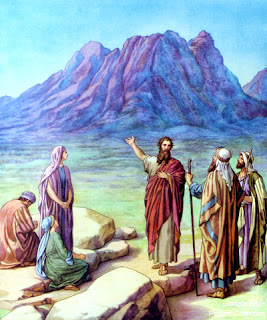 Unbeknownst to Israel, tales of their exploits had spread as far as the land of Midian, prickling the ears of Jethro, priest of Midian, Moses’ father-in-law. Hearing what Lord had done for this wandering nation, Jethro decided it was time to reunite his daughter and grandsons with their husband and father.

Scripture does not tell us when Moses sent his wife, Zipporah, and their two sons, Gershom – literally meaning “Stranger There”, and Eliezer – meaning, “My God is Help”, back to Jethro in Midian. However, it must have been when the plagues of Egypt were most intense. It could have been six months or more since Moses last saw his family. The message from Jethro announcing their visit was indeed good news.

When Moses' family arrived, he told Jethro all the Lord had done for Israel and the many great miracles:

Jethro then rejoiced saying, “Blessed be the Lord who has delivered you…now I know [He] is greater than all the gods.”

Being a priest of Midian, Jethro was familiar with the idols and false gods worshiped by Egypt and his neighbors. He had seen the impotency of these carved wooden objects overlain with gold. But until now, he was uncertain who was greatest.

Realizing the LORD God of Israel is above all so-called gods, Jethro presented a burnt offering and other sacrifices to worship Him. 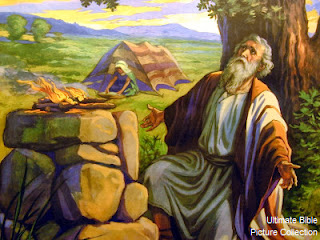 Aaron and the elders came and joined the family for a great meal.

At daybreak, Moses began his normal duties of settling the squabbles of all Israel. From morning until night, people stood in line to have their disputes judged. 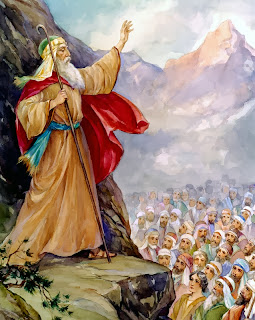 When Jethro saw the weariness of the people and of Moses, God spoke through him.

Jethro instructed Moses to delegate the responsibilities to able, God-fearing men who love truth and hate covetousness or greed. Moses would teach these men God’s statutes and laws and “show them the way in which they must walk and the work they must do.” Once educated, he gave them leadership over thousands, hundreds, fifties, and tens.

These godly, well-trained “lawyers” would judge the smaller disagreements, but the extremely difficult ones they would take to Moses. By this, God instituted His ideal earthly government, men ready to receive and disseminate His law.

Don’t you wish every government official would truly fear God, love truth and hate covetousness? If you do, then pray to that end.