- October 27, 2013
“Then it came to pass on the third day, in the morning, that there were thunderings and lightnings, and a thick cloud on the mountain; and the sound of the trumpet was very loud, so that all the people who were in the camp trembled.” (Exodus 19:16) 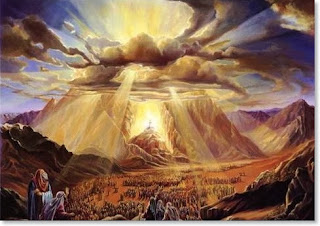 Moses constructed boundaries, consecrated Mount Sinai, and sanctified the people, meaning he called for repentance of sin and humility of heart. Their inner man needed to be as clean as their outer. He instructed them to bathe, don clean apparel, and abstain from intimate relations with their spouse, all in preparation for this third day.

Soon Israel would hear the voice of God.


According to God’s commands, Israel felt ready. However, upon hearing the deafening trumpet and thunder with lightning, terror rather than awe, filled their hearts. Fire, smoke, and seismic activity surrounded the mountain, because the King of the Universe had come down.

The unapproachable light of God’s Shekinah Glory appeared to Israel as fire, speaking of His supreme authority, omniscience, omnipresence, and absolute judgment.

As Moses led Israel closer, most feared this glorious scene, but some became inquisitive. The Living and Eternal God knew curiosity would overtake their fear. The unrepentant would breach the boundaries and sneak up the mountain to gaze at the Lord. In so doing, they would perish, because sin and mortality cannot endure the natural outflow of God’s Holiness.

This was the reason for boundaries and grave consequences. God was protecting sinful Israel, further demonstrating His amazing love and longsuffering. In fact, when Moses reached the top of the mountain ready for this monumental conversation, Almighty God sent him back down to restate His warning, so His holiness would not break out against them.

Only our Triune God is holy – completely without sin. Humanity has a sin nature. Therefore, the only way we can enter His presence and not perish, is through a mediator.

Since the moment God called Moses, forward to this third day and beyond, while he lived, Moses was Israel’s mediator or go-between. In this, Moses foreshadowed the Lord Jesus Christ, for He always lives to make intercession for us.

But who was Moses’ mediator? How was he, a sinful human, able to draw near the Lord to hear His voice and then convey God’s law to Israel?

First, understand our Creator God is sovereign – His choice is His choice.

Secondly, God Himself, in the person of our Lord Jesus Christ, was Moses’ mediator. Jesus, God in the flesh, was the Lamb slain before God laid the foundation of the world. (Revelation 13:8) 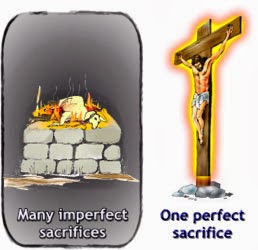 Moses drew near to God through Jesus Christ.

Jesus is also our only Way to the Father. When we repent, His shed Blood cleanses us and absorbs the outflow of God’s Holiness. Therefore, we may boldly enter into His presence and worship. (John 14:6; I John 1:9; Hebrews 10:19-20)
boundaries Daniel 4:35 Exodus 19:16 Father go-between God's holiness hear voice of God Hebrews 10:19-20 I John 1:9 intercession Jesus John 14:6 mediator only Way Revelation 13:8 Shekinah third day