Ruth 1:1-2:  “Now it came to pass, in the days when the judges ruled, that there was a famine in the land. And a certain man of Bethlehem, Judah, went to dwell in the country of Moab, he and his wife and his two sons. The name of the man was Elimelech, the name of his wife was Naomi, and the names of his two sons were Mahlon and Chilion--Ephrathites of Bethlehem, Judah. And they went to the country of Moab and remained there.” (NKJV)

Bethlehem, Judah, was their home, their God-given land and to leave was a serious decision.

Judah, meaning “Praise”, was the fourth son of Jacob and Leah. His descendants, including Elimelech, filled this territory. Bethlehem, or “House of Bread” also known as Ephrath, was the burial ground of Jacob’s
most beloved wife, Rachel.


Centuries before, Jacob now Israel, prophesied the scepter and ruler’s staff would not depart from Judah until Shiloh comes. Seems Elimelech had forgotten this prophecy, and although he did not know it, Bethlehem Ephrathah, held a high place in God’s plan. It would be the birthplace of Shiloh, the coming King. The King we know as Jesus.

But even in famine, for these Ephrathites to run away to a country that hated Israel, was not a good decision. 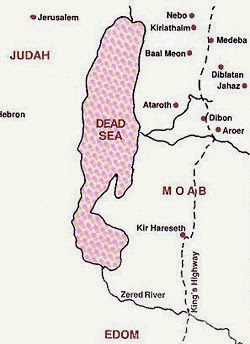 Maybe Elimelech also forgot Israel would not possess any of the land of Moab, because God gave it to the descendants of Lot, Abraham’s nephew. Lot’s offspring, Moab (meaning "through our father"), came from his incestuous relationship with his eldest daughter.

Not that being the product of an incestuous relationship makes you evil, because it doesn’t. Our sin nature makes us evil.

Nevertheless, the inhabitants of Moab were notorious for evil behavior. Years earlier during Israel’s wilderness journey, Balak, king of Moab, hired Balaam to curse Israel. When God would not permit a curse, Balaam instructed the Moabites to entice Israel with sexual sin and idol sacrifice to Baal of Peor. Many Israelites perished as a result.

Why would Elimelech want to move to Moab and allow his sons to grow up amongst people who now worship the false god, Chemosh? This just doesn’t seem wise to me.


Still, Moab was only about eighty miles from Bethlehem. Why did Moab have rain and Judah didn't? Was it just the lay of the land, or was it a God-ordained drought, and the famine, a result of unrepentant hearts?

Clearly, famine doesn't happen overnight. It's not one day there's food and the next day there isn't. Famine happens over time. First the rain stops, then the soil becomes dry, finally the crops wither and die and eventually the people too. One thing just led to another.

Unfortunately, for our poor farmer, deceived by the lure of self-preservation and maybe the dream of affluence, he and his family arrived in Moab.