Does history intrigue you as it does me? When I read historical accounts, a movie seems to play in my mind, and I can picture the event and sense the emotions.

That happened this week when I considered Thanksgiving and found myself reading The Mayflower Compact. So, let me set the scene. 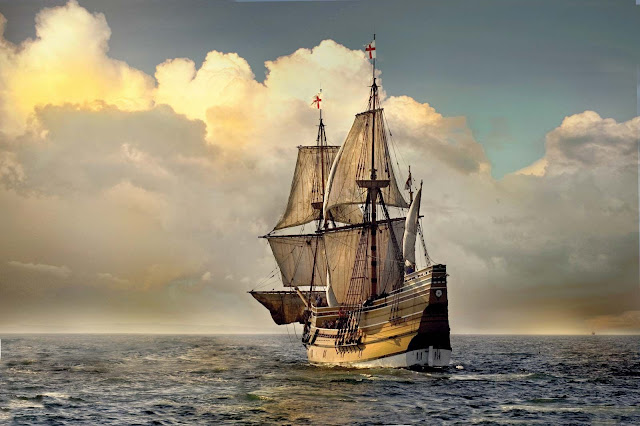 On a crisp September morning, over one hundred men, women, and children prepared to set sail from England to reach a new, unsettled land across the Atlantic. Calm and smooth seas prevailed at first, but soon the wind whipped. Great swells rocked the mighty ship, and storms churned the waters. Overcrowding made the voyage uncomfortable. Hot tempers emerged and desired to dominate as they sailed toward their destination—northern Virginia.

But these passengers were Christians on a specific mission. And they believed if a man’s ways please the LORD, He establishes their thoughts, makes enemies to be at peace with them, and He alone directs their path.[1]

Tempests filled the sails with boisterous wind that blew the Mayflower off course. Finally, after sixty-five days at sea, a crew member high in the bird’s nest shouted, “Land ho.”

Joy filled their hearts. These adventurous, brave souls knew freedom to worship God according to His Holy Word—and not according to the rules of the state church was now within reach. And while this most honorable goal greatly pleased the LORD, it wasn’t their primary purpose for leaving home.

Still, had the Pilgrims arrived in Virginia as planned, they would have remained under the established rule of King James of England. And they may never have learned how to govern themselves with God as their only King.[2]

So, when the ship neared the coast of Cape Cod and dropped anchor, God’s wisdom prevailed. The Pilgrims knew chaos would ensue without the rule of law. Thus, those ready to disembark paused, prayed and drafted the document we now know as the Mayflower Compact.

“In the presence of God and one another,” forty-one men covenanted and combined themselves together into a civil body politic. “For the glory of God,” they penned as their first and highest goal, “and advancement of the Christian faith….” Like missionaries, they desired to spread the Gospel of Jesus Christ to the natives and to live peaceful lives worshiping Almighty God.

“…Just and equal laws, ordinances, acts, constitutions, and offices would be meete (appropriate),” they wrote, “…for the general good of the Colonie unto which we promise all due submission and obedience. In witness whereof, we have hereunder subscribed our names at Cape-Codd the 11. of November…Anno Dom. 1620.”

The Great Commission[3] spurred these Pilgrims to leave their country, their families, and all the comforts of a “civilized” land. God directed them to a new continent and inspired The Mayflower Compact to govern it.

After Columbus’s 1492 discovery, the 1620 landing at Plymouth Rock is what we look to as America’s beginning—not our birthday—since King James still ruled. However, when we did free ourselves from England, historians tell us Thomas Jefferson considered The Mayflower Compact when drafting our 1776 Declaration of Independence.

All in all, the citizens of Plymouth Colony gladly served the King of Kings—and had He not sent them to Cape Cod—to these kind natives, they surely would have perished. A year later, grateful Pilgrims and Natives held a feast lasting three days. They thanked God for His provision and blessings, for guiding them, preserving them, and for sending aid just when they needed it.

Four hundred-two years later, we have a nation no one then could have imagined, yet it is a nation in decline. So, as the Pilgrims did, let us always abound with thanksgiving[4] for blessings, guidance, preservation, and aid. But also pray God upholds America until Jesus appears for His Bride.